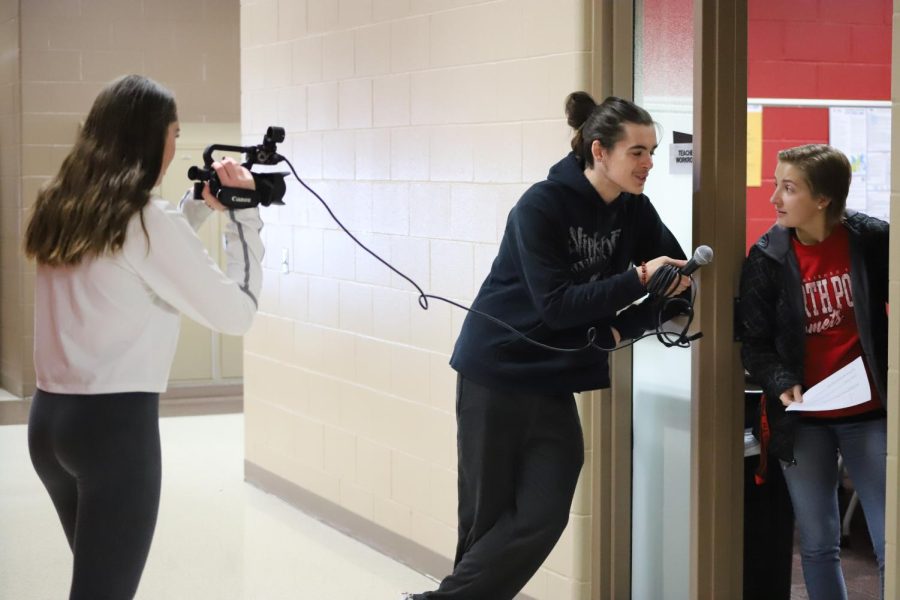 North Polk High School created “Galaxy News” this year and since then their broadcast team and audience has grown.

Some short features include “Michael in The Streets” and hype videos that the broadcast students choose to create. Alongside the short skits, the “Galaxy News” updates tend to be shorter videos to get information out to viewers about what is happening within North Polk High School for the coming week. For example, anchors share when and where games will be for the week.

As the broadcast grows, so does their equipment to be able to keep up. When the new wing at the high school was completed, the new broadcast room was also ready to be used. They have a green room and electronic equipment made just for them. Charlie Rhoads is a junior on the broadcast team and shared, “The new equipment is incredible to work with, the new cameras are awesome, and we have new editing software.”

The new equipment also makes it easier for them when live streaming. They have new headsets that allow them to communicate easier when far apart at games.

Live streaming is a way “Galaxy News” gets a lot of views. If someone is unable to attend the game to watch, people are also able to watch from home online. Their most viewed video was a live stream of North Polk playing against Dallas Center Grimes in football. They received 2,200 views. Excluding the live streams, their highest viewed news update was published recently. It was “Galaxy News 02/02/2022” with 168 views. Normally “Our views sit right around 80-100 views, we would definitely like to get that up at some point through more social media exposure,” shared Rhoads.

Overall, “North Polk Galaxy News” is growing throughout the years and hopes to continue growing with the number of students in broadcasting and the number of audience members they have. Rhoads stated, “Everyone should try broadcasting because it is extremely fun.”