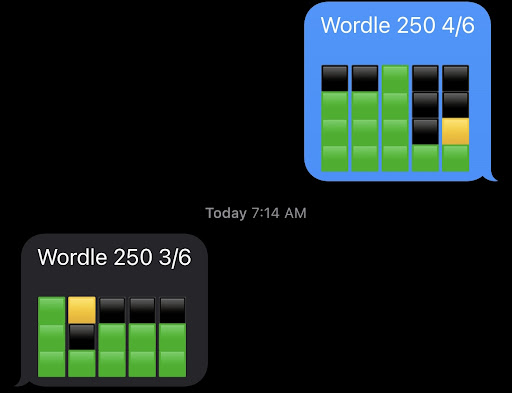 People sharing their “Wordle” scores with each other through text message.

Josh Wardle developed a game called “Wordle” that is now taking a large interest in students’ and staff’s daily life.

The name of the game came from Wardle’s last name and because players are trying to guess a five letter word. There is a new word for players to guess every day, but only one word for the day. People get six chances to try and get the right word. After each guess, the game highlights each letter with either black, yellow, or green squares. Black squares represent the letter not being in the word at all. Yellow means the letter is in the word the person is trying to guess, but is in the wrong spot. Lastly, green notifies the player that the letter is in the word and in the correct spot.

If a person does not guess correctly within their guesses, “Wordle” tells them the word they were trying to guess. Since there is only one word for each day, the player will have to wait until the following day to try again.

Colby Anderson plays “Wordle” on the daily. He was introduced to the game by his friend Daniel Pierre and instantly became fond of it. Anderson likes to start with a different word every day, but mentioned “A great word to use is adieu, almost all of the vowels are there.”

Currently, Anderson has a winning streak of 22 days with most of his guesses taking four tries. Although he has gotten a word on his second try before, Anderson shared his “Outcomes with Daniel, Wyatt and Drew, we make fun of one another based on who does the worst.”

Mackenzie Keenan also plays “Wordle” after learning about the game from other students talking about it at school and she also saw it on Tik Tok.

When starting a new round each day, “I used to always start with audio to get all the vowels out of the way but now sometimes I’ll start with pause or earth. I also sometimes use the word from the previous day to start,” Keenan shared.

Currently Keenan’s streak is two days long. She normally gets the word with four, five, or six tries. Afterwards she typically talks about it with people in her first three classes.

Susan Vernon teaches several English classes in the high school. Her children showed her “Wordle” and now she plays it everyday on her phone. When choosing a word to start with, Vernon shared, “ I switch it up but I do have a favorite word I use a lot.”

Vernon stated, “I love it [“Wordle”]! I end my day with it every day and I will fail any kid who tells me the answer before the day is over.”

Overall, the game “Wordle” has been slowly becoming a part of most people’s lives. It is something most people enjoy and look forward to playing.  “Wordle” is a way to push a person’s thinking on the daily while still making it fun for people to participate in.