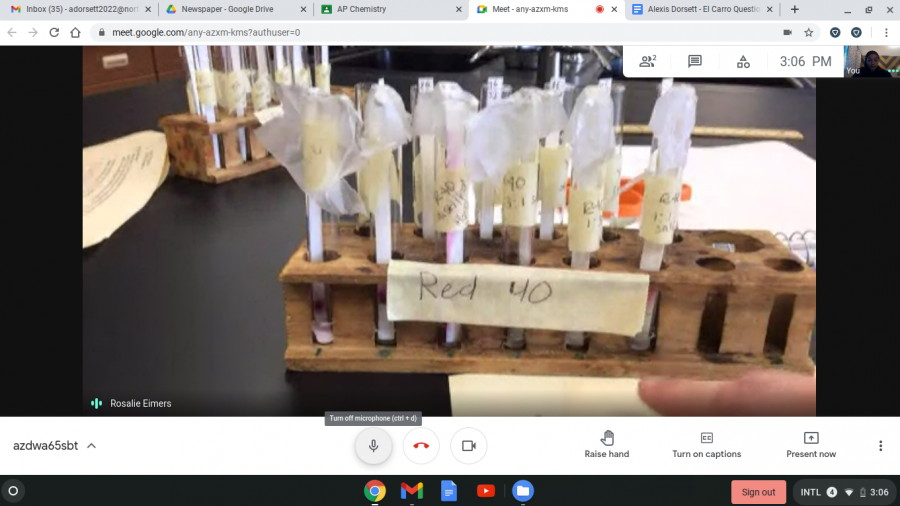 Alexis Dorsett signed in on google meet to attend AP Chemistry class for the lab she had on March 3.

My name is Alexis Dorsett and I had COVID-19.

My experience with COVID-19 was unique. Unfortunately, I was symptomatic. I had a runny nose, sore throat, headaches, and extreme nausea. COVID-19 is unlike any other cold I have had in previous years. I can be perfectly healthy for a period of time and then when I least expect it or when I start to do something, such as my homework for class, I would begin to get nauseous. I would have to lay down and take a break from what I was doing to try to feel better. It was difficult to get out of bed at times. To add on, I have very long hair and at times when I would feel nauseous and my hair would seem unbearable because it would constantly feel heavy. My mother contacted my pediatrician and I had a prescription to help me be able to do my daily activities without feeling the need to carry a bucket with me.

Before I knew I had COVID-19, I still attended school. I knew I was not feeling well, but I thought it was a cold because I was not exposed to anyone who had recently tested positive. I had let my father know how I was feeling and he told me it was my choice on how I wanted to handle the situation. I told myself I would wait to see how I felt to see if it got better or not. I started feeling sick on February 24, a Wednesday. I finished out the week, but a few of my teachers were able to notice I was not feeling well because they mentioned I did not seem like myself and was not focused on the class. Since I started to feel worse as time went by, I got tested on Monday, March 1. The next day, my father was notified that I tested positive and we had to contact the school.

Sadly since I tested positive, I had to report people I may have exposed. I have quarantined three of my friends, Cora Reed, Austin Mays, and Will Williams, and both of my brothers. My friends Reed and Mays were both supposed to compete in the Jazz Band Competition, but due to them having to quarantine they were unable too. I felt bad they had to miss the competition, but I would rather be safe, instead of possibly spreading the virus. Recently, Williams started showing symptoms of COVID-19 and shared “my symptoms haven’t been bad, but on some days they are more apparent and make the day harder than others.”

As mentioned before, my brothers are currently quarantined and will not be able to return back to school until after spring break. One is in kindergarten and he is upset that he does not get to go to school with his friends. Every time I saw him when I got a meal my mother had set aside for me by the stairs, he covered his mouth with either his hand or his shirt and used his other hand to wave at me to go away. My sophomore brother has been signing into his classes online, but has been handling the quarantine well. Both my parents have the COVID-19 vaccine and tested negative, which allows them to continue to go to work and proceed with their daily activities.

Overall, having COVID-19 was a difficult time when I had things I needed to accomplish for school. I am enrolled in an online DMACC course where I had to still complete my weekly assignments when I was not feeling well and I fell behind in my classes at North Polk while I was still signing in to class everyday.

Now a week after my symptoms have resolved. I have post COVID-19 issues. I am a part of the North Polk High School Track team and I have not been able to participate in the hard practices because my chest and lungs would begin to hurt and my head will start to feel as though it is swelling or pounding. I am slowly getting back to normal, but I have to wait and take time to be able to be fully recovered. For instance, I have no sense of smell still and no one knows exactly when it will return.

COVID-19 is not a simple thing to ignore. People miss out on things due to quarantine and people get sick. Even though I am good when it comes to wearing a mask, there is always a chance to get it, but wearing a mask prevents the likelihood of spreading the virus and keeps other students in school. 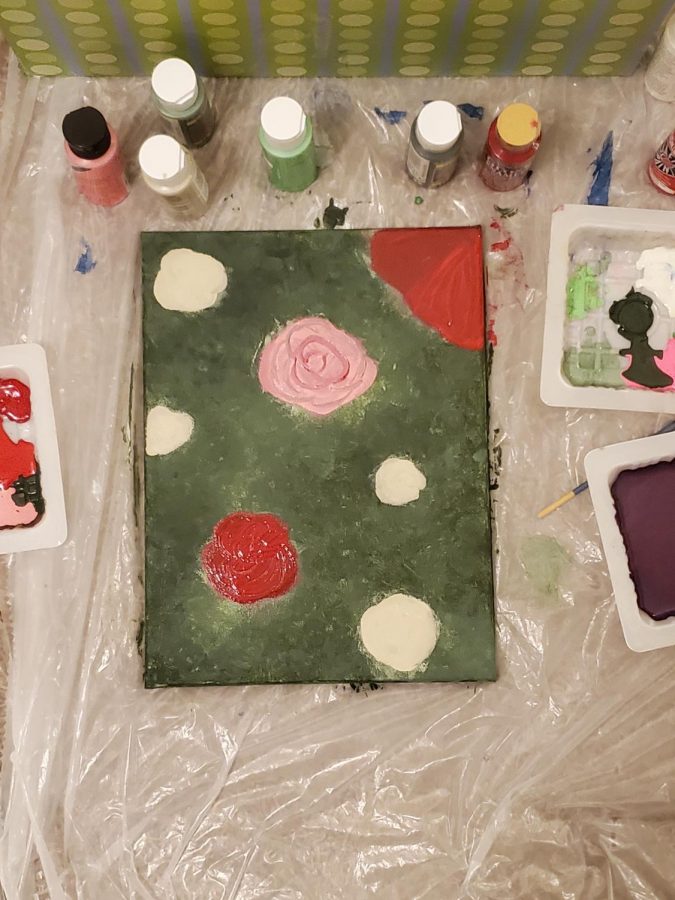 An unfinished acrylic painting of a rosebush that I started later in my quarantine.

The last week of February was an unprecedented time in my life. After three boring days of what I had believed to be stomach flu, it turned out that I had COVID-19. One would think that a stuffy nose, the inability to taste or smell, and overall lethargy would be dead giveaways, but I was somewhat reluctant to accept that I had the virus after managing to evade it for nearly a year.

Initially I had been staying home because I suspected I had stomach flu, which I had been exposed to at work. I suspected nothing of it, and hoped that I would be back within a day or two. However, in order to be able to come back to school, I had to get a doctor’s note saying I was good to go. On Thursday, Feb. 25, I went into my doctor’s office, and was tested for COVID-19.

I honestly thought I didn’t have it. I had been wearing my mask almost everywhere, and I had no idea who else would have had it that I had been with recently. Because of this, I shrugged off my symptoms and chalked it up to the aftermath of stomach flu. Obviously that was not the case. My results came back positive the next day, Friday. By then, my nose was no longer stuffy and I had to face the fact that I could not taste or smell anything, no matter how hard I tried. I was also incredibly lethargic and hardly moved. I felt awful laying in bed all day, which normally isn’t the case.

I had no idea where I caught covid from; it could have been anywhere. Luckily, I did not have to have other people quarantined, as I had been home since Tuesday that week. I did, however, have my family quarantined. My mom, who works in healthcare, did everything she could to make me feel comfortable and recover quickly. She made me my lunch and dinner and brought it up to me on a little tray, as well as keeping me company from the door frame as I laid in bed. My brother, however, was extremely cautious when I was quarantined, and went out of his way to avoid me when I would so much as open my door. I don’t blame him though, he was just being cautious. He actually went to get tested the day before my quarantine was over, and on March 5, his results came back negative. He was incredibly relieved.

Having covid was a wild experience. After avoiding it for nearly a year, I had no idea what to expect over the week and a half that I was sick. I was cooped up in my room for so long that I began to wish that I could do something. I made friendship bracelets for a few hours at a time, but I got bored, and it strained my eyes squinting at all the tiny strands of string I looped around over and over.

I even took it upon myself to lay a plastic tarp down on my carpet and mess around with some acrylic paints just to be able to feel like I wasn’t wasting my days away. I wanted to be able to enjoy my time to myself.

Aside from taking up acrylic painting, I had to focus on online school, which was extremely difficult. Staring at a screen for that amount of time put a huge strain on my eyes, and it was definitely the cause of a lot of my headaches throughout the days. Still, I did my best to complete my work and be somewhat involved, even if I was not feeling up to it all.

My experience with having COVID-19 was one I will never forget, much like this entire pandemic. It seemed like it would last forever, yet it was gone in the blink of an eye. I know that I am extremely lucky to have come out of quarantine almost fully recovered, as I know there are so many other people who are not as fortunate. That seemingly boring, brief, week and a half of laying in bed confined to my room will forever stick with me.

Now, after nearly a week of recovery, I still feel the effects of the virus. I still have a hard time smelling things, and everything that normally has a very strong flavor now tastes like a bland LaCroix. I have also had trouble catching my breath. I play the bass clarinet in band, and I participate in choir, jazz choir, and musical. It’s been really hard keeping up with all of it, but day by day, I can feel my condition improving ever so slightly. I am incredibly glad to be back at school, and hopefully I can get myself back into the rhythm of things sooner than later.